Sechenov University is actively integrating its unique robotic traumatologist in clinical practice. A specifically programmed robot can automatically carry out major stages of surgery in the Clinic of Traumatology, Orthopaedics and Joint Pathology. In 2019, the robot has already performed over 30 surgeries. All the surgical procedures went off without a hitch and with no complications. In 2020, it is expected to take part in a total of 200 surgeries.

To perform surgery, surgeons need to do nothing but perform all the required examinations and upload all the input data to a workstation. All the rest of the robots of this kind, now in Russia or abroad, are only capable of assisting real doctors during surgery.

The main hallmark of Sechenov University’s Clinic of Traumatology, Orthopaedics and Joint Pathology is a combination of high-quality medical service and research with unique top-notch developments that are introduced into the treatment process following due tests. Patients have access not just to cutting-edge Russian and foreign technologies, but also to the experimental ones and thus stand significantly higher chances of recovery.

“Every person has their own one-of-a-kind biomechanics and anatomy, and our robotic system helps factor in all the nuances of every patient and make sure that the prosthesis is fitted accurately. There is such a term as prosthesis survival. Its major prerequisite is the correct positioning of prosthesis parts. A deviation of as little as 1–2 degrees can result in prosthesis instability and premature wear in 10–15 years. With our system, we can do precise calculations so as to implant the prosthesis accurately”, says Alexey Lychagin, Director of the Clinic of Traumatology, Orthopaedics and Joint Pathology, and Head of the Department of Traumatology, Orthopaedics and Disaster Surgery, Sechenov University.

The robotic system is made up of a workstation and robotic traumatologist. The first stage is presurgical planning done on a special workstation. The patient undergoes CT of their entire lower extremity. The system builds an image and measures over 400 parameters. Then follows the planning stage, when the type, size and position of the prosthesis is customised using a virtual model of the patient’s bone. After a holistic analysis the plan is finalised and the surgery programme is sent to the robot. This surgery plan is one-of-a-kind and cannot be used in any other patient later.

In the operating theatre, the surgeon gets an access to the knee joint (following anaesthesia) and then digitalises the joint surfaces. Then the robotic system automatically conducts the main stage of surgery without the surgeon’s involvement, as per the uploaded presurgical plan. The surgery typically lasts for around 17 minutes. After that the surgeon fixes the prosthesis parts with the bone cement and sutures the wound.

The robot performs resection of a femur and tibia with a precision rate up to 0.5 mm and 0.5 degrees from the limb axis. With the system, the presurgical plan can be fulfilled 100%. Such precision cannot be guaranteed manually even by a highly experienced surgeon, during either planning or surgery. Surgeons have to undergo special training to learn how to handle this robotic system. Only highly qualified professionals with an experience in endoprosthetic surgery are allowed to sign up.

At present three surgeons and two postgraduates from the Clinic of Traumatology, Orthopaedics and Joint Pathology have access to such robotic surgery. Their number will grow in the future. The robotic system gets improved regularly, and with time its functions will be augmented to accommodate for other types of endoprosthetic joint replacement surgery.

Dear friends and colleagues, As we look ahead to 2020, may I wish you peace, health and happiness during the holidays and throughout the coming year. Happy New Year and merry Christmas! Best wishes, Petr Glybochko Rector 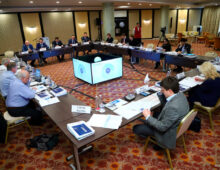 Sechenov University Maintained its Position in the 5-100 Project

On 25-26 October, the 5-100 Project Council held a session on Global Competitiveness Enhancement of Russian Universities among Global Research and Education Centres. The Council analysed the progress made by participating universities, including Sechenov University. As a result of this work, the Council selected participants for a new round of the 5-100 Project from 2020…